Description:
Sitting on the north-east coast of Tasmania near the quaint fishing village of Bridport, Barnbougle Dunes / Lost Farm has established itself as a golf destination of the highest caliber. Both golf courses make the most of the dune-land they are built on – in classic Scottish-links style, they use the natural features of the land. Both fairways and greens follow the undulations of the land. This means you’ll often be playing approach shots either above or below your feet. It’s also a true challenge to two-putt if you don’t get your ball close on approach as the surface rises and falls.
Cavernous bunkers protect greens or threaten tee shots along the fairways.
Between October and December, the trade winds known as the Roaring Forties power through Bass Strait, between Tasmania and mainland Australia. The courses are designed with these strong winds in mind, often playing into the prevailing north-westerly and sometimes playing downwind.

Barnbougle Dunes, which was designed by American Tom Doak and Australian Michael Clayton, offers narrower tee shots and smaller greens than Lost Farm, which generally has wider landing areas to aim at with your driver. The dunes are taller here, with the fairways often laid out like carpet at the base of these.
Interestingly, Lost Farm features 20 playable holes. Renowned US architects Bill Coore and Ben Crenshaw presented two holes to finish the regular 18 holes, but both were embraced and built. The course is a short drive to the east and is separated by the meandering Great Forester River.

The golf courses are situated in a spectacular location – with golden beaches on one side next to Bass Strait and gorgeous farmland on the other, giving a true sense of being in the dune-land ecosystem. Simply put, this is one of the most beautiful places in Australia. Wallabies and kangaroos roam around the farmland and a variety of shorebirds nest on the sand of the beach, such as the Hooded Plovers and Fairy Terns. The dunes are also home to tiger snakes, which is something to consider when searching for a lost ball. I almost stood on a frightened echidna (a spiky, egg-laying mammal) as I tried to take a photo of the beach setting.

The property was developed by Tasmanian farmer Richard Sattler, who grows potatoes and raises cattle on the 6070-hectare (15,000-acre property). Sattler runs both the golf courses and the farm with his family.

The vision he showed in building two of the finest golf courses in the world is remarkable. The Bridport locals thought he was either crazy or having a mid-life crisis when he decided to go ahead with the investment.

“They don’t quite say it as often now,” the stocky and affable farmer told me in the clubhouse after I finished my round. “I’m having the last laugh.”
Sattler was convinced by American golf resort developer Mike Keiser, owner of Bandon Dunes, that the site was perfect for golf. And he knew the development was going to work out shortly before Barnbougle opened in December 2004. After inviting a local golfer to try the links out he got a glowing response following his round.
“‘That was better than sex’ he said after dropping his bag down.”

Golf Digest ranked Barnbougle Dunes No. 33 in the world in 2016 and Lost Farm at No. 40. Australian Golf Magazine has previously ranked them the No. 1 and No. 2 public access courses in Australia, respectively.

“You do your homework, you build it properly and you go for it,” Sattler says. “You’ve got to have a backbone, not a wishbone.”
The challenges: Barnbougle Dunes and Lost Farm offer a true challenge for the amateur golfer when the wind is up and it can howl here. If you don’t control your ball, it will sail away into the thick marram grass and be lost. The undulating greens are tricky to read, too. Most of them are elevated, making the challenge more difficult. Both fairways are a mix of fescue and bentgrass, and it is cut close so you’ll need to have a top short game to chip or pitch with enough spin to hold the greens. It’s advisable to play bump-and-run shots using a hybrid or seven-iron or simply putt up onto the greens.

When to play: Year-round. Most challenging period is October to December, when the prevailing north-westerly wind is strongest.
Par Barnbougle Dunes 71. Lost Farm 78
Yardage: Barnbougle Dunes 6723 yards, 6148 meters. Lost Farm 7101 yards, 6493 meters
Slope rating: Barnbougle Dunes 132. Lost Farm 132.
Course rating: Barnbougle Dunes 72. Lost Farm 73.
Best hole: Barnbougle Hole 8 is a great example of how the course has embraced the natural contours of the land. At 446 meters (448 yards) off the back tee, it is also one truly difficult par 4, with a giant grass-covered mound splitting the fairway. The second shot is to an elevated green that is protected by a steep escarpment – it takes a solid drive and then a towering fairway wood to climb up to the level of the green. Lost Farm Hole 4 has a massive bunker, typical of the course, directly in front of the green, and another you can potentially hit in to on the left if you go into the first. The tee offers a beautiful view of the river and the beach.

The pro says: “Absolutely stunning. I think that this is not only one of Australia’s best, it is one of the best courses in the world, old or new.”
Geoff Ogilvy on Barnbougle Dunes*
The resort experience:
This is a more focused golf destination without all the side-line attractions of other resorts and one of the best-value resorts you’ll find. It is widely regarded as the best public access golf course in Australia and the reputation is attracting keen golfers – individuals, couples and groups – from all over the world. And the golfers keep coming back, too, according to owner Richard Sattler, who says “80 per cent of our business is repeat”.
Dine and wine:
Lost Farm Restaurant is the perfect place to relax and take in a stunning view of both the course and coastline from one of the highest points on the property. At sunset, this is one truly memorable place to enjoy a meal. The owners pride themselves on using fresh, locally-sourced vegetables, meat and seafood. I savored the entrée of slow-baked Tasmanian scallops, served in Mornay sauce and bread crumbs and Parmesan. The ‘fries’ on the side plate were more like whole potatoes. That was accompanied by a delicious local wine.

The accommodation:
Barnbougle Dunes offers some 3.5-star cottages for those on a tighter budget as well as some upmarket villas, each featuring four executive bedrooms and full kitchen. The Lost Farm Lodge feels more like a stylish hotel, with either a double or single-queen suite. Enjoy the balcony view of the course and farmland all the way to the start of Tasmania’s Sidling Range mountain range – it’s the perfect way to relax into the evening.

Other activities: The Barnbougle Spa offers a variety of packages to help you unwind and renew the body and the spirit, which may be needed if you’ve lost a lot of golf balls in the dunes. They include facials, massages and a vitality spa, where couples can soak together and sip on a local wine. You’ll also find a naturopath and even childbirth education classes.

Barnbougle also hosts an annual polo event in January, in the lead up to which you can actually learn how to play. I also recommend dropping into one of the nearby vineyards for some wine tasting on your way up from Launceston airport.
* Source: barnbougle.com.au/play/the-dunes/about/ 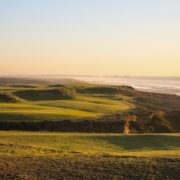 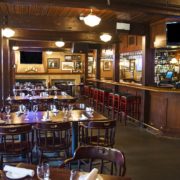 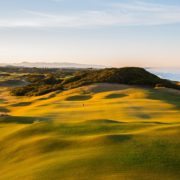