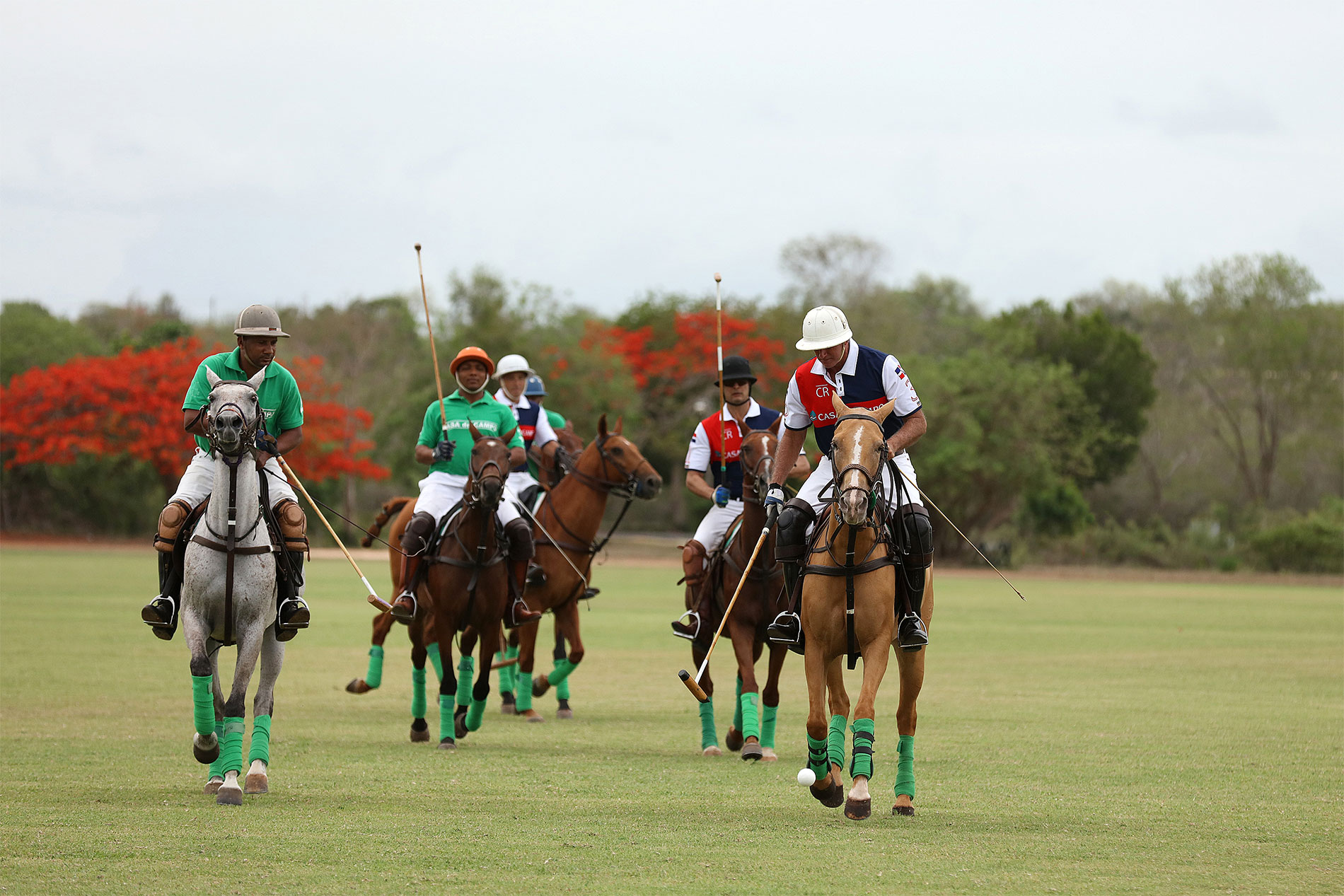 A trip to Casa de Campo Resort & Villas on the Dominican Republic’s south-east coast will reward you with the opportunity to play three championship courses designed by World Golf Hall of Fame member Pete Dye. The development sits on some 7000 acres (2833 hectares) of pristine coastal land, with numerous holes sitting next to the azure waters of the Caribbean Sea.
The signature course is Teeth of the Dog, a 7471-yard (6831-meter) challenge that has been ranked the No 1. golf course in Latin America and No. 39 in the world by Golf Magazine in 2015. It has also taken the title of the Caribbean’s Best Golf Course 2014 at the World Golf Awards. When Dye spotted the beautiful and rugged piece of coastal land, he thought it was the perfect place for a golf course. However, it wouldn’t have been much fun to carve out the rocks and coral by hand to make way for tees, fairways and greens before it opened in 1971. A Dominican crew of 300 used chisels, sledgehammers and pickaxes to do the work. They referred to the area as ‘Dientes del Perro’, or ‘Teeth of the Dog’ – and the name stuck. The course features seven Caribbean-edged holes and two extremely difficult par threes (Holes 7 and 16).

Golfers must also play Dye Fore, a 27-hole course that has seven cliff-side holes that drop some 300-feet (91 meters) to the Chavón River below on one side. It boasts two of the best par three holes you will play – holes 12 and 15 – as well as 360-degree views that take in the Dominican Mountains, the Caribbean Sea, the river and Casa de Campo Marina and Altos de Chavón artists’ village. The course was renovated in August 2014 with Paspalum greens. In September 2011, the resort opened Dye Fore Lagos, an additional nine holes on the northeast side of the property. Five holes work around three large lakes including two par threes with small greens.
Finally, The Links course provides classic links-style play reminiscent of Scotland. The course was built in 1976 but has since been renovated with Paspalum greens. The 6900-yard design is situated inland and features water hazards on five holes as well as multiple bunkers. 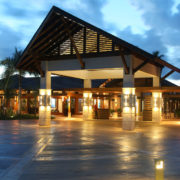 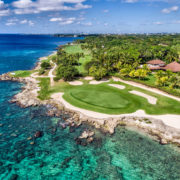 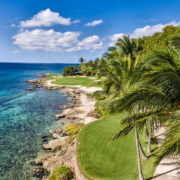 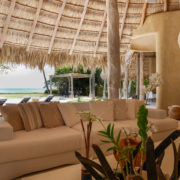 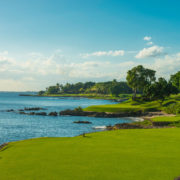 The challenges:
Teeth of the Dog features seven Caribbean-edged holes, devilish doglegs, long fairway bunkers, small targets for greens as well as water hazards (lakes and ocean). The prevailing north-easterly trade winds can make it even more of a challenge. Teeth has two of the toughest par 3’s in golf. Dye Fore has five holes with lakes in play and, being elevated, experiences winds gusting up to 40 miles per hour (64 kilometers per hour). The Links Course is situated inland and water comes into play on five holes, while grass roughs and multiple sand traps will provide ample challenge.

When to play: Year-round, although the rainy season stretches from late April until October.
Par: Teeth of the Dog – par 72; The Links – par 71; Dye Four – par 72.
Yardage: Teeth of the Dog: 7471 yards, 6831 meters. Dye Fore: 7740 yards 7077 meters. The Links: 6900 yards, 6309 meters.
Rating: Teeth of the Dog 75.9, Dye Four 77.0, The Links 72.6
Slope: Teeth of the Dog 145, Dye Four 134, The Links 126
Best hole(s): So many great ones to choose from, but Hole 8 on Teeth has arguably the trickiest green, while the green on Hole 5 is almost entirely surrounded by the Caribbean. Also recommended are Hole 11 on The Links and Hole 4 on Dye Fore, Marina side.
The designer says:
“Almost by accident, I saw before me the most beautiful seaside location for a golf course, little did I realize that my wonderful discovery would be the start of a lifelong devotion to this Caribbean country and its warm, gracious people.” Peter Dye*
The resort experience:
Casa de Campo Resort & Villas has been a favored tropical escape for the world’s politicians, financial moguls and Hollywood stars. They might have been attracted by the spacious suites, hotel rooms or luxury villas, the huge choice of gourmet dining with seven restaurants and bars, or the diverse range of outdoors activities between daiquiris. Or it might just be about being surrounded by the warm service of the Dominicans. Being able to park their yacht in the 370-slip Marina & Yacht Club would be an added drawcard.

It’s an idyllic setting, too, with the Chavón River winding its way to the Caribbean Sea. Come at the right time and you’ll see Flamboyan trees blooming with fiery-colored flowers sitting next to lush bougainvillea.
Guests receive a four-passenger golf cart for their personal use to explore the property – which makes it easier to race between the many attractions such as the replica Mediterranean village, Altos de Chavón. Some great facilities can found on the lush tropical grounds, including a 245-acre (99 hectare) Shooting Centre, Polo and Equestrian Centre, La Terraza Tennis Centre.

Casa de Campo has received more awards than can be mentioned here, but they are currently shining the trophy for the World’s Leading Luxury Sports and Villa Resort 2016 from the World Travel Awards and the Caribbean’s Best Golf Hotel 2016 gong they won at the World Golf Awards.
Dine and wine:
I get excited about food so I might just put on weight at Casa de Campo. There are seven resort restaurants boasting a wide range of gourmet cuisine and fine wines and spirits. The idea of digging into fresh seafood at The Beach Club (run by The Maccioni Family of the renowned Le Cirque Restaurant in New York) as I enjoy the cool see breeze on Minitas Beach is particularly appealing. Other options include La Cana by II Circo (Mediterranean cuisine), Pubbelly Sushi (Japanese-inspired fare), Sophia’s Bar & Grill (expect DJ and band), La Casita (Spanish cuisine, tapas), The 19th Hole (lunch overlooking Teeth of the Dog), the Lago Grill (Dominican cuisine) and La Piazzetta (Italian recipes).
The accommodation:
The hotel rooms are comfortable and offer easy access to the main and lobby pools. The Classic, Garden, Oceanfront and Exclusive Villas offer another level of privacy and luxury with your own pool and staff ready to serve breakfast.
Other activities:
The water sports look particularly fun here. Try snorkeling next to Catalina Island, kayaking on the Chavón River, sailing a catamaran on the Caribbean, paddle surfing or a half-day of trophy fishing out to sea. On land, after a spot of tennis, target shooting or polo, you’ll want to explore Altos de Chavón – an artisan’s village modelled after a 16th-century Mediterranean city with museums, boutique shops and a 5000-seat Grecian-style amphitheater opened with the help of one Frank Sinatra in 1982.
* Source: planetgolf.com.au