Description:
Sitting on the eastern coast of Izu Peninsula about two hours’ train ride from Tokyo, Kawana Hotel has long been known for its golf. The resort has two courses set out along the shoreline of the Pacific Ocean – Oshima and Fuji – but it is the latter that has developed a reputation as one of the best in the world. Fuji was designed by British architect Charles Hugh Alison and opened in 1936. The natural beauty of the site struck Alison when he was on vacation there in 1930, and he convinced hotel owner Baron Kishichiro Okura he needed a top-class golf course, according to a brief history provided by Planet Golf *.
It is the mountainous topography next to the ocean and stunning views that set this course apart – on a clear day you can see the snow-topped, 12,388-foot (3776-meter) Mount Fuji in the distance. The dramatic elevation changes start off the first tee, with the fairway dropping quickly before rising again by the ocean-side green on the 415-yard (379-meter) par four. Two cleverly positioned bunkers are ready to gobble balls off the tee and on approach respectively.
The designer managed to bring the best out in the seaside location, using the landscape’s features to create some exceptional holes, including No. 7 (a 393-yard / 359-meter par four with a tight tee shot between the trees, undulating fairway and four bunkers that flank a small green), No. 9 (a 367-yard / 335-meter par 4 with a split fairway that climbs) and the scenic No. 15 (a 480-yard / 439-meter par five that plays alongside the ocean cliffs and has a tough shot that flirts with the water), according to Planet Golf.
Fuji Golf Course is ranked No. 64 in Golf Digest’s World’s 100 Greatest Golf Courses 2016-17 and hosts the LPGA Japan Tour’s Fuji-Sankei Ladies Classic Tournament each April. Japanese golf writer Masa Nishijima rated this the best resort golf course in Asia.
Kawana’s Oshima Course was designed by Japanese architect Otani Mitsuaki and opened in 1928. It features some stunning ocean views but does not match Fuji in terms of layout. Both Oshima and Fuji are available only for hotel guests, and golf carts feature a GPS guide to help players with distances. 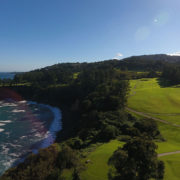 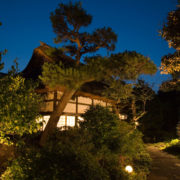 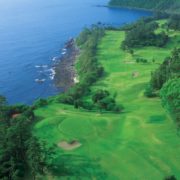 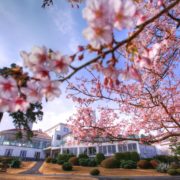 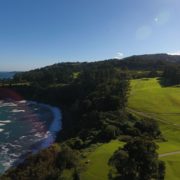 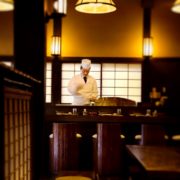 The challenges: The elevation changes, narrow tee shots and smartly positioned bunkers will test low-handicappers here, while dense foliage will swallow up balls from errant shots.

When to play: The warmer months are fine (Kawana’s July average is 21 degrees Celsius, according to HolidayWeather.com **) but would be too cold in December, January and February.
Par: 72
Yardage: 6701 yards, 2127 meters
Slope: N/A
Rating: 72.7
Best hole: The Fuji Course’s par 5 hole 15 is the signature hole here. You’ll be hitting from an elevated tee with the ocean on the left side of the dog-leg left. Big hitters will take their ball over the water and tree line. Watch out for the fairway bunkers and trees along the way to a shallow green.
The designer says:
“The scenery resembles that of the French Riviera, but at not a single spot between the Italian and Spanish frontiers can be found so superb a combination of sea, cliffs, trees and mountains.”
– Charles Hugh Alison *
The resort experience:
Kawana Hotel has an impressive and historic main building overlooking Sagami Bay. From the observation deck on the fifth floor of the Shin-Honkan Building, you can see over the two outdoor pools and golf courses and across to the island of Oshima.
There are cool places to relax here. Hang out in the library with your favorite book or journal, shoot some pool in the billiard room, or go to the Mah-jong Room to play a Japanese version of rummy that uses tiles.
The pools are filled with water from Amagi Mountain and are open during the summer season, but you’ll have to pay to swim unless you’re under three. The large lap pool could be worth it.

Dine and wine:
Guests have five options to choose from here, but I’d be booking into Inakaya first. The restaurant operates out of a 300-year-old country house and specializes in Japanese food. Elsewhere you’ll find the Main Dining room (French cuisine), the Grill (more casual fare), Sun Parlor Lounge (for tea, coffee and homemade cake) and Main Bar (cocktails and more).
The accommodation:
Kawana starts with the Ocean View Twin Room A, with 40.5 square meters (436 square feet) and a balcony to chill out on, and moves through to a Suite Room with 74.6 square meters (803 square feet) including lounge area. The rooms come with all the typical amenities you’d expect from a top-class hotel and some extras (toothbrush, razor and Japanese bathrobe). The kettle and refrigerator will come in handy.
Other activities:
Take a trip to Akasawa Spa and relax your muscles in the hot spring as you take in the ocean views. It’s approximately 30 minutes away by car. You might also want to take the scenic views offered from the top of Omuro Mountain, which you can ascend easily using the lift. It’s about 25 minutes’ drive from the resort.
* Source: Planet Golf
** Source: www.holiday-weather.com/kawana_us/averages/