Description:
The Bluffs is a stunning links-style course on the south-eastern coast of Vietnam approximately two and a half hours’ drive to the south-east of Ho Chi Minh City. It was designed by Australian golfing legend Greg Norman and opened in 2014 with a game between New Zealander Michael Campbell, Englishman Robert Rock, Vietnamese star Tang Thi Nhung and rising local amateur Ng Bao Nghi. Campbell was impressed with the layout.
“I’ve played a lot of courses around the world and this (one) is as good as it gets,” he said.* 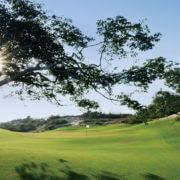 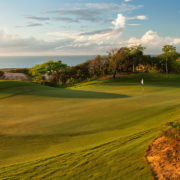 The golf resort, which features the luxurious hotel The Grand, is emblematic of how golf is growing in statue in Vietnam. The course plays host to the Ho Tram Open – one of the country’s richest sporting events – on the Asian Tour in March.
Adopting an approach of least disturbance to the sand dunes it is built on, Norman embraced the site’s natural features – vegetation, rocks, streams and undulating topography – to create each hole.

“This is one of only two pieces of land of this quality and character I have ever been given to work with – the other being Doonbeg [in Ireland],” Norman said in a statement published by the course. “I’m a firm believer in using what Mother Nature gives us on a particular site. This one has it all.”
The result is outstanding – The Bluffs was named “World’s Best New Golf Course” at the 2015 World Golf Awards in Portugal, Golf Digest ranked it No. 74 in its list of the World’s 100 Greatest Golf Courses 2016-17 and Japanese golf writer Masa Nishijima rates it as the second-best golf resort in Asia.

To give you an idea of the challenge: the 257-yard (235-meter), par-3 fifteenth plays uphill to the highest part of the golf course, with sandy waste area all the way to the left side of the green. It’s worth taking in the ocean views once you get there.
The Bluffs clubhouse is impressive, too – a 2300-square-meter (24,757-square-foot) building that features the five-star Infinity restaurant, spacious lockers and a balcony that overlooks the back nine and the East Sea.

“This site is also more elevated (than most), which offers more dramatic views and also brings the wind into play more,” Norman said. “Wind was definitely one of the most significant factors in designing the course, especially since the direction changes 180 degrees for several months during the year. It affected nearly every decision, from the initial layout of the holes to fairway widths and irrigation coverage. Fortunately, we were able to create a good balance of holes for it.”

The challenges: Classic links-style shotmaking with natural undulations, blind shots around the large sand dunes and a mix of jungle vegetation and sandy wasteland if you miss the fairways.

When to play: The course is open year around but will play longer during the wet season (from April to September) as opposed to the dry season (October to March). The course is closed for maintenance on Tuesdays.

Par: 71
Yardage: 7007 yards; 6408 meters
Slope: 131
Rating: 74.4
Best hole: Hole 10 will test even long hitters with 651 yards (595 meters) to the green. The par 5 plays downhill off the tee, before levelling out, and can then be attacked in several ways.
The designer says: “Playing true links golf among the dunes of southern Vietnam and having dramatic ocean views throughout your round will make The Bluffs Ho Tram Strip one of the most unique golf experiences in the world.” – Greg Norman *
The pro says: “It’s a seaside course, naturally carved through sand dunes. The elevation changes provide for some extremely dramatic views. The course has two distinct wind directions, which can be very strong in the dry season.”
Patrick Kelly, Head Professional
The resort experience:
After you wrap up your round, it’s time to head back to The Grand – a 541-room hotel that aims to treat you with warm service and five-star luxury. The rooms are elegant, the buffet breakfast is included and the room service is 24 hours, but it’s the activities that stand out here. This place looks like an absolute hoot to visit. It’s perfectly positioned next to the sandy beach and has a bunch of features for kids (or the young at heart) such as the huge Dragon Slide that carries you into the pool (for kids 12 and up), putt-putt golf, an arcade-style game center, and the Grand Cinema with movie screenings, all complimentary for guests. The Grand Central Park has football, basketball and a kids’ playground, too. However, I may have to stay away from the Jukebox Karaoke, depending on how brave I feel – there are individual rooms for those inclined.

Dine and wine:
You might have to walk the course after touring the eateries – there are 11 restaurants and bars to choose from here catering for every palate, including
two gourmet facilities: Ju Bao Xuan, which serves up Cantonese cuisine, and The Grand Bistro, which offers French-crafted fare including steaks and fresh seafood. I’m going to try the fresh seafood at Ginger, which specializes in traditional Vietnamese dishes, and 8 Dragons, which has Chinese noodles and Korean fare. Afterwards, I might settle back with a whiskey in hand at Club 9, a nightclub with dancing into the early hours.

The accommodation: There are six different types of rooms to choose from, starting with the Grand Double (with two double beds) all the way through to the Premier Ocean View Suite, with two bathrooms, a fridge and microwave, lounge room and stunning outlook over Ho Tram Beach. Expect double marble vanities, tubs and showers in the bathrooms. The rooms carry free Wi-Fi and 46in LED TVs but hopefully you’ll enjoy the views over the dunes, the course and the East Sea on the balcony instead.
Other activities:
As well as the previously mentioned kids’ activities, it is hard to go past the fun on Ho Tram Beach. The beach services team can fix you up with a surfboard, body board, stand-up paddle board or kayak. There is beach-side yoga, too. Other facilities include a fitness center, Kids’ Corner (with daily activities such as crafts and tennis) and spa. More adventurous types can take the Minh Dam Tour, a half-day outing that takes in historic sites at Minh Dam Mountain.
* Source: thebluffshotram.com