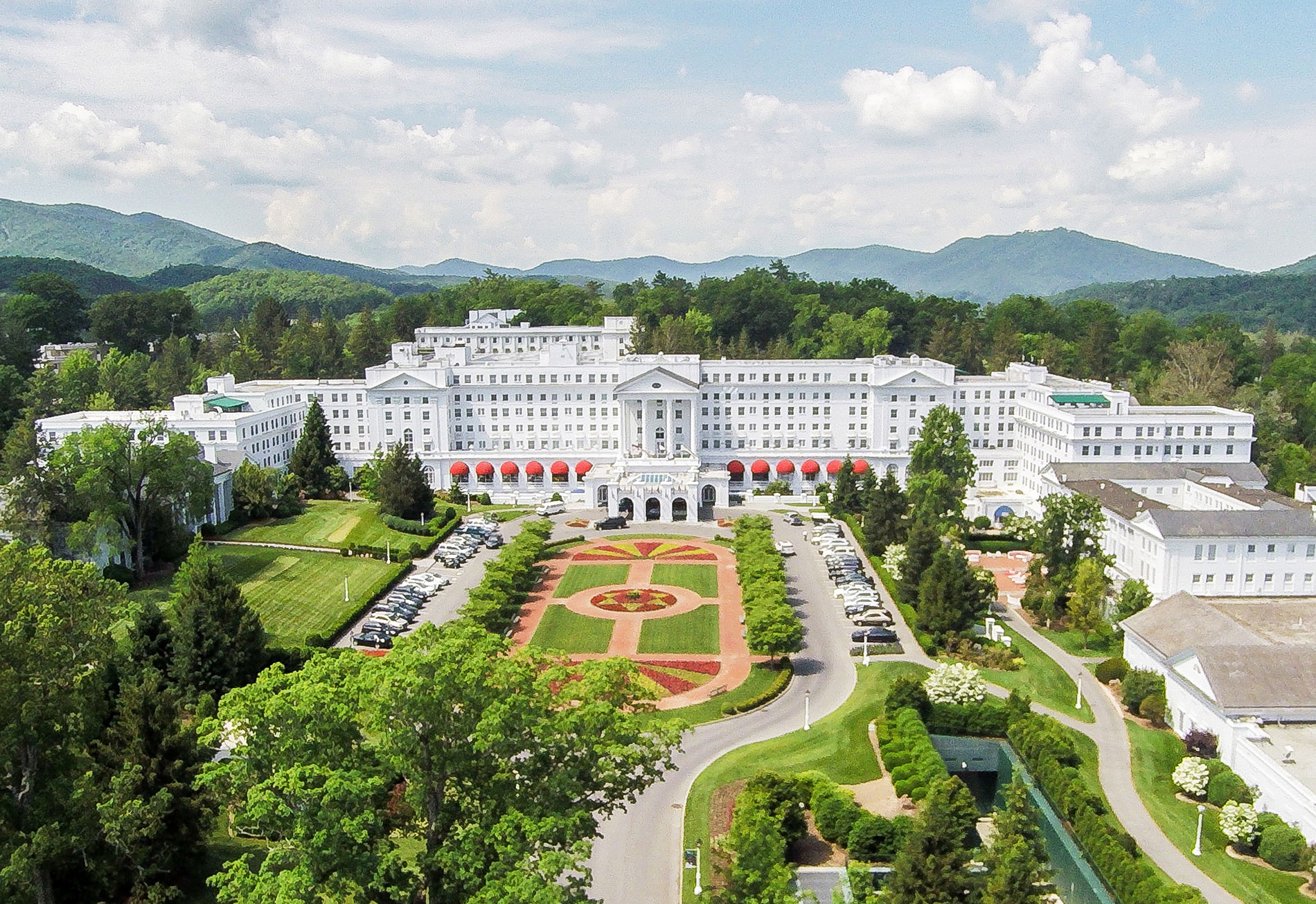 Description:
Sitting in a valley in the beautiful Allegheny Mountains in the small West Virginian city of White Sulphur Springs, The Greenbrier is one of the oldest and most prestigious golf resorts in the United States. It features five championship golf courses by American designers, including the Old White TPC, The Greenbrier, The Meadows, The Snead and Oakhurst Links, the oldest golf club in America, having opened in 1884. The first three are open to resort guests who get a discount over members of the public.
In 2016, severe flooding caused extensive damage to the golf courses, especially Old White TPC, The Snead and The Meadows. But it wasn’t just the golf courses impacted by the deadly flood as Golf Digest’s Tim Rosafort reported.
“Greenbrier owner Jim Justice reached out to people who lost their loved ones and homes and had no place to go. He opened the doors of his resort to feed and house the displaced. More than 200 took him up on the invitation, some among the resort’s 1800 employees who live in the area.” 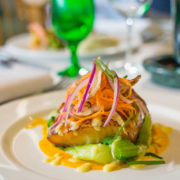 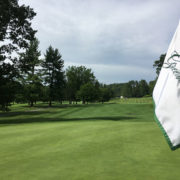 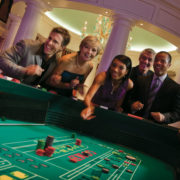 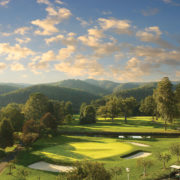 The staff at the famous resort and White Sulphur Spring residents were quick to start rebuilding. The Old White TPC is a 1914 Charles Blair Macdonald design and the restoration work that was done to modernize and fix this famous course tried to remain as true to the pioneering American architect’s original concept as possible, according to Jamie Hamilton, Greenbrier’s Associate Director of Golf.
“All of the work we’ve done during its restoration was done with the intent of honoring and showing his hole templates, features and design elements in the most authentic way possible.”
The Old White TPC is the host course for the PGA TOUR’s Greenbrier Classic and is the only Macdonald design available to the public in the US. This is one course to play and tick off the bucket list.
“It is the perfect combination of traditional design, over 100 years of history, modern tournament experience and a brand-new restoration featuring new grass types across the course,” said Hamilton.
Since the flood, The Meadows has had significant routing changes from Dick Wilson’s 1963 layout and other major renovations including the introduction of riveted bunkers throughout the course.
“As the only course on property, and one of relatively few in the US to feature this design element, we knew it would provide our golfers with a memorable and unique experience,” said Hamilton.
“The Meadows will impress golfers as a dramatically improved version that utilizes some of our best creek-side land, mountain vistas, newly introduced riveted bunkers along with updated greens and grass across the property.”
The Greenbrier was designed by American Seth Raynor in 1924 and renovated by Jack Nicklaus in 1978 before it hosted the Ryder Cup the following year (the US team won). The heavily-wooded course also hosted the Solheim Cup in 1994 (the US won again). There are some challenging holes here including the 456-yard (417-meter) hole 6 with its narrow fairway and green that’s protected by a huge bunker. It didn’t stop Sam Snead shooting 59 in the final round of the 1959 Spring Festival, the first to achieve this score in competition. The Greenbrier is set to be renovated again under the guidance of Phil Mickelson in 2017.
The Snead, a Tom Fazio course that opened in 2004, is open only to members and there are limited tee times for non-members at Oakhurst Links, which is a more recent addition to the Greenbrier Resort. Modern golf sticks are not allowed here – instead players hit gutta-percha balls with hickory shafted sticks.

The challenges:
On the Old White TPC you’ll face many risk-reward holes and it is about weighing up whether it is worth going for the green or laying up, especially with the number of bunkers protecting greens. “Macdonald liked to give players two options on most shots – the safe shot to the larger part of the fairway/green and the bold line where trouble comes into play,” said Greenbrier pro Jamie Hamilton. “As golfers play the course they have to decide on a shot-by-shot basis whether the risk is worth the reward or if the safer player is the better option.”
“On The Meadows, the key will be keeping it in the fairway off the tee as there are many tight driving holes. If a player can keep it in the fairway and avoid the green-side bunkers, it is a relatively short course and they can score well.”
When to play:
The Old White TPC’s season is generally April through to November, while The Meadows is March through to December. The Greenbrier’s best months are April through to October considering its position along the mountains. The winter months of January and February are generally too chilly for golf.
Par: The Old White TPC – par 70. The Meadows – par 70. The Greenbrier – temporarily unavailable.
Yardage: The Old White TPC – approximately 7300 yards, or 6675 meters. The Meadows approximately 6600 yards, or 6035 meters. The Greenbrier: N/A.
Slope and Rating: N/A
Best hole:
The Old White TPC’s hole 18 is a 175-yard (160-meter) par 3 dubbed ‘Home’. It has been the site of high drama at the finish of The Greenbrier Classic with play at the final green regularly deciding the winner, often during playoffs. The Meadows new hole 16 will likely be the signature hole, with a large drop in elevation and some lovely mountain views on the dogleg-left par 4. The Greenbrier’s tough 456-yard (417-meter) hole 6 is one to watch out for, too.
The pro says:
“The Old White TPC is the only Charles Blair Macdonald golf course available to the public and is an outstanding example of his highly-regarded design style. Additionally, as the host course for the PGA Tour’s Greenbrier Classic it plays host to some of the best golfers in the world every summer. The Meadows will impress golfers as a dramatically improved version that utilizes some of our best creek-side land, mountain vistas, newly introduced riveted bunkers along with updated greens and grass across the property.”
Jamie Hamilton, Associate Director of Golf
The resort experience:
Golf is the central focus of the Greenbrier, a regular stop on the PGA Tour that has rich sporting history and three championship courses open for visitors. However, the Greenbrier started welcoming guests in 1778, well before the game we love flourished in North America. Instead, people were drawn to the natural mineral springs that were found at the 11,000-acre (4452-hectare) property – the same sulphur spring water is used today in the Mineral Spa for hydrotherapy and bathing.
There is a great sense of tradition at this resort – the Greenbrier is a National Historic Landmark. The hotel is an enormous grand white building whose famous façade and pillars are reminiscent of the White House. Pioneering interior designer Dorothy Draper directed the renovation of the luxury hotel after it was used as a hospital during World War II.
There are 33 suites, 710 rooms and 96 cottages and the interiors have a colorful and homey look to them. The resort boasts that 26 of the 45 US Presidents have stayed at the Greenbrier. It wasn’t just golf that these leaders enjoyed here – there are more than 55 activities at the resort as well as plenty of fine dining. The luxury holiday destination has continued to receive awards and plaudits for its services, such as being included in Condé Nast Traveler’s Gold List: The World’s Best Places to Stay in 2014 and Travel + Leisure’s Top Resorts in the Continental US in 2014.

Dine and wine:
The Greenbrier features 20 restaurants, cafes, and lounges so it will take a long stay to try each of them. A team of 12 chefs, along with three sommeliers to match fine wines, are behind these culinary experiences. The Main Dining Room has been serving guests – not the same guests – since 1913. You can enjoy a buffet breakfast there or maybe have a coffee and pastry at The Greenbrier Gourmet. Sam Snead’s at the Golf Club (soups, salads, wood-fired pizza) and Slammin’ Sammy’s (burgers) pay homage to the legendary golfer who was the professional at The Greenbrier. You can head to one of these restaurants during the golf season for lunch. In-Fusion’s menu covers Chinese, Japanese and Thai, and it also sits next to the casino for those who enjoy a flutter on the roulette or blackjack tables. I favor a medium-grilled steak at Prime 44 West instead.
The accommodation:
Signature Resort Rooms, Legacy Cottages (two to four bedrooms), Greenbrier Estate Homes (four to seven bedrooms) and the Windsor Club (one- to seven-bedroom suites) are available. The Dorothy Draper décor and interiors are colorful and traditional in keeping with the historic resort. Starting at a Gable Room (150 square feet, 14 square meters) with a double bed, flat-screen TV and Greenbrier Mineral Spa Toiletries, and going all the way through to the seven-bedroom Presidential Suite, there are plenty of choices here. We assume the presidents chose the latter option, which has a library, a living room with grand piano, dining room, and patio across two floors. All the secret service agents could get a king-size bed (if they’re allowed to sleep).
Other activities:
Perhaps the most surprising thing about The Greenbrier is the number of activities available on the 11,000-acre property. The resort boasts over 55 of them, some being seasonal, such as shooting ringneck pheasants. My favorites are the canopy tour (seven ziplines and five cable bridges plus rappelling), guided fly-fishing for trout in Second Creek (all gear provided), swimming in the Olympic-size indoor pool or heated infinity outdoor pool, movies at the cinema, and the Adventure Zone for kids, which has everything from bowling to horse-riding. I’ll also be taking the history tour of the declassified bunker at The Greenbrier. It’s no wonder so many presidents came to play golf here – they wanted to check out the emergency Cold War fall-out shelter, which is carved deep inside a mountain beneath the West Virginia Wing of the resort. This is a golf resort with a difference.