Abu Dhabi, the capital the United Arab Emirates, sits on the coast of the Persian Gulf and the edge of the Arabian Desert. It’s an arid climate that is not conducive to cultivating lush fairways and greens for golf. But just as the city has seen massive investment and development since 2000, witnessed in buildings such as Etihad Towers, golf courses are being constructed like man-made oases. Architects such as Gary Player (Saadiyat Beach) and Kyle Phillips (Yas Links) have been brought in to develop world-class golf courses. The Abu Dhabi Golf Club – also known as The National – opened in October 2000. Designed by veteran Swiss architect Peter Harradine, it is considered one of the top courses in the United Arab Emirates. The par-72, 7440 championship course hosts the Abu Dhabi HSBC Championship, a PGA European Tour event that attracts some of the top players in the world each January with a $US2.7-million purse.

The desert land offered little in the way of natural features and elevation changes to include in the layout, but now has 90 bunkers and seven lakes. It had to be manufactured. It was an unusual challenge for Harradine.
“The National was a salt flat, we didn’t have a site to work with at all … There were no contours whatsoever – it was completely flat,” Harradine said in an interview with NBC Golf Channel. “We brought in a lot of sand to raise it and, of course, it’s all artificial what you see. The National is artificial. It was great because you could play god a bit.”
The championship layout has large bunkers around the greens (many in the shape of puzzle pieces) and fairways weave between the lakes and palm trees. With a rating of 75.8, this is a tough course.
Harradine was also instrumental in the design of the unusual-looking clubhouse, with a roof in the shape of a falcon that has its wings outstretched and a massive glass front that allows three levels to look out on the golf course.
“It was the first golf course in Abu Dhabi, so obviously it had to be something a bit unusual … we had to create an iconic clubhouse.”
The course is also floodlit and you are invited to play nine holes during the day and nine holes at night like a day-night cricket match.
Guests can also play a 3299-yard/3017-meter, par-36 nine-hole course that is far easier.
With the luxurious Westin Abu Dhabi Golf Resort and Spa built next to the course and ready to book your tee times, this is one of the top golfing destinations in the Middle East. 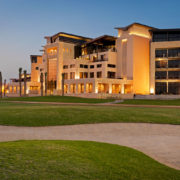 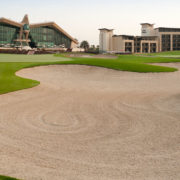 The challenges:
From the back tees, this is a long course. The layout is generally flat but errant shots can easily find the lakes – water hazards are on 12 holes – or large bunkers.
When to play: Year-round, although July and August have average temperatures approaching 100 degrees Fahrenheit (or 37.7 degrees Celsius)**.
Par: 72
Yardage: 7440 yards, 6803 meters
Slope: 141*
Rating: 75.8*
Best hole: The par-4 seventeenth will see you hitting over a lake off the tee before the fairway doglegs to the right. There are three fairway bunkers to avoid and another two flanking the front of the green.
The designer says: “I think its success is that it is not too difficult and it can be played by the normal player. The fairways are wide, there aren’t many hazards.” ***
Peter Harradine
The resort experience:
The Westin Abu Dhabi Golf Resort and Spa is located in the Sas Al Nakhl area, a short drive from the CBD and Abu Dhabi International Airport. The large main building is a light tan brick construction with falcon-shaped roofs. The chic interior is a mix of textured white-brick columns, dark wood panels and marble flooring. There are six restaurants at the property as well as the Heavenly Spa situated in lush gardens. Here, staff offer beauty treatments, such as facials and full-body wraps, and massage therapy for men and women in six treatment rooms. Given how hot it gets in summer, the 700-square-meter / 7535-square-foot lagoon-shaped main pool will be a welcome retreat. There’s also a lap-pool surrounded by palm trees.
I like that checkout is at 12pm.

Dine and wine:
I’ll be booking into Italian at Sacci to try the Risotto di Mare with lobster claws, Atlantic prawns, scallops and baby squid served with the cuttlefish risotto. Elsewhere you can enjoy a buffet at Fairways, pub cuisine at The Retreat sports bar, cocktails and seafood at the plush Lemon & Lime Lounge, vegetarian dishes or burgers at Shades Pool Bar, and fresh coffee at The Lounge. Kids can also get a pass for all-inclusive dining.
Abu Dhabi Golf Club house has some fine dining at The Grille for seafood and steak, lunch and beers at Café 28, and drinks by the club’s pool at the Championship Lounge.

The accommodation:
There are 172 rooms, including 19 suites with modern interiors and contemporary decor. Starting at the Deluxe Room (45 square meter / 484 square feet), which has the option of a king-size bed or two twins to sleep three people, floor-to-ceiling-glass doors onto a balcony overlooking the golf course plus a work desk. The Presidential Suite (475 square meter / 5113 square feet) has two master bedrooms, a spa, living room, work area, kitchen and three terraces with views. Some rooms, such as this, come with breakfast included. Free Wi-Fi is provided throughout.
Other activities:
Guests at the Westin receive complimentary access to the Saadiyat Beach Club, a facility that sits next to the turquoise waters of the Persian Gulf, approximately 30 minutes’ drive away. It features a 650-square-meter (6997-square-foot) outdoor pool that you can roll into off the cabanas that are right next to it. There’s also a spa in the club and restaurants, too. The nine-kilometer (5.6-mile) stretch of beach that Saadiyat sits on is a protected habitat for Hawksbill turtles.
In the city, I’ll be heading up to the Observation Deck at 300, which can be found on the 74th floor of Tower 2 of the Etihad Towers. You get a spectacular view of Abu Dhabi from 300 meters (984 feet).
Abu Dhabi has some fun family attractions, too, including the nearby Ferrari World, which has rides such as the Formula Rosa rollercoaster that reaches a speed of 240 km/h (149 miles/h) in five seconds. The Yas Waterworld has dozens of rides and slides, including a 235-meter (771-foot) Tornado waterslide. Then the Wadi Adventure park has a man-made surf pool, white-water rafting, and kayaking, too.
Back at the resort, the WestinWorkout Gear Lending Program provides clean workout gear, including joggers, if you didn’t pack your own. The resort will also provide trail maps for local 3- and 5-mile (5- and 8-km) routes.